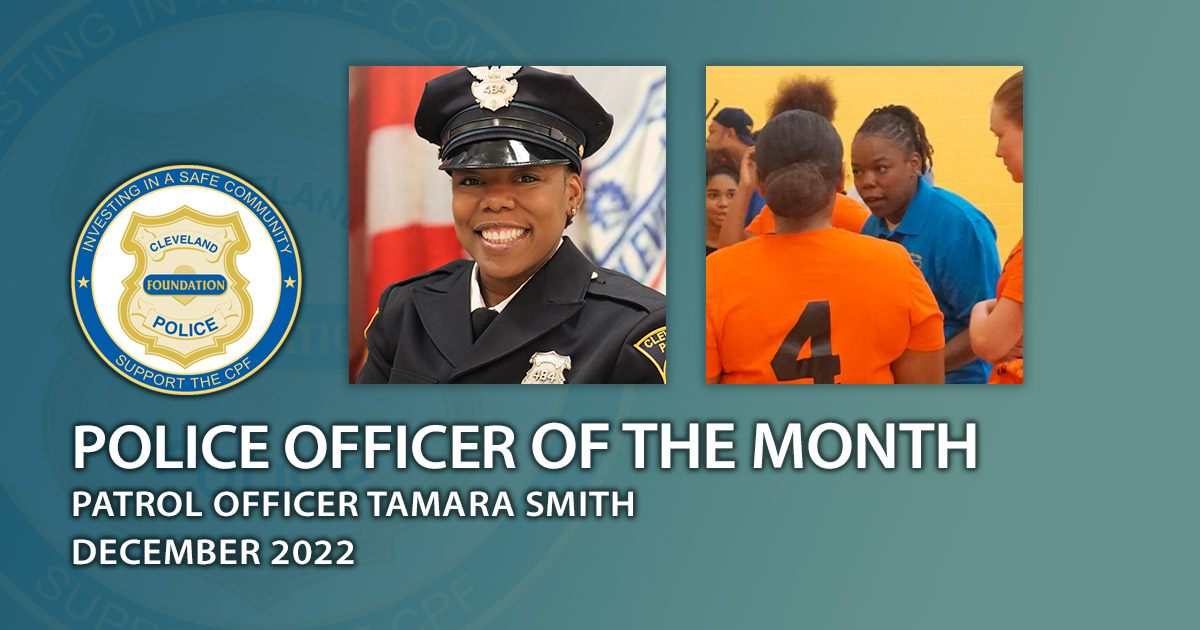 This month’s Cleveland Police Foundation’s Police Officer of the Month, Patrol Officer Tamara Smith, is a hard working and dedicated officer who still finds time in a busy schedule to spend time with the youth of the community.

Officer Smith volunteered to coach the PAL Team during the NIKE/PAL Summer Basketball League held at Cudell Recreation Center this past year. Although she worked night shift, she gave up some of her sleep to coach for six weeks and mentor the young ladies on her team. Tamara’s love for basketball, having played in high school and college, and for youngsters was a perfect combination.

When reached for comment Executive Director of PAL, retired CPD Sergeant Bob Kumazec, stated “Tamara is an outstanding person, we feel so lucky to have her as one of our PAL officers, the girls loved and respected her.”

It is because of her dedication and devotion to both her job and the community that the Cleveland Police Foundation is honored to name Patrol Officer Tamara Smith our Police Officer of the Month for December 2022.

About the Police Officer of the Month Program

The Cleveland Police Foundation – in partnership with the Cleveland Division of Police, Cleveland Police Patrolmen’s Association, and the Fraternal Order of Police Cleveland Lodge 8 – is proud of the  Police Officer of the Month program. The program’s purpose is to recognize members of the Cleveland Division of Police who not only perform their duties in an exemplary and extraordinary manner, but also excel in efforts that are consistent with a major tenet of the CPF’s mission to strengthen the bonds between citizens and police officers… building bridges, creating opportunities for dialogue, and forging positive relationships within the community.

Already aware that officers in the Cleveland Division of Police routinely go out of their way to help their fellow citizens, committee members are not surprised by the large number of candidates. With so many outstanding officers, selecting one recipient per month proved to be a somewhat daunting task.

When asked why bestow these awards, CPF Executive Director Charles W. Lane, Jr. states, “In today’s busy world, while some deeds may seem fairly insignificant, we hold out hope that such random acts of kindness may have a significant impact on a person’s life. Even if not, it’s nice to know that our police officers do for others what they would want someone else to do for a member of their family if the opportunity presented itself.”

Police officers across this great country perform similar deeds day-in and day-out, with little fanfare and really not seeking, nor even wanting recognition. We commend these officers for their compassion and personal commitment to making our city a better place to live.