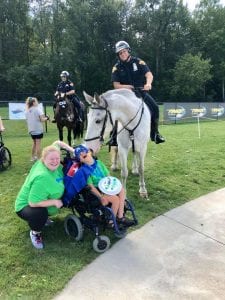 On a sunny Saturday in Avon, Ohio, the Super Hero Kids, who are children battling disabilities, serious illnesses, and adversity, were truly the heroes!

The kids saved the Super Heroes to Kids in Ohio, including Superman, Batman, Aquaman, Wonder Woman, and a slew of others! Foiled were super villains from the likes of Lex Luther to Poison Ivy!!

Avon Mayor Bryan Jensen was rescued by the Super Kids after being kidnapped by the Joker!!

A big thanks to Lois Lane for her superb reporting, Tim Misny, Otto Orf (former Cleveland Crunch soccer star), Dawn Kendrick (journalist), and of course the Super Heroes to Kids in Ohio!!