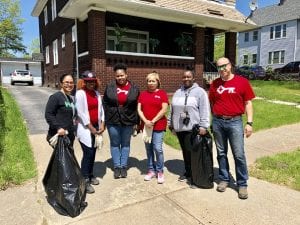 Nearly 50 community members came out to Parkview Avenue on Wednesday May 15th to not only clean up the neighborhood, but to honor the memory of Cleveland Police Officer Derek Owens who died in the line of duty on March 1, 2008!!

The Cleveland Police Foundation sponsored this event after receiving a request from friends at KeyBank volunteering their services to a community project!! There was no better time for KeyBank “Make the Difference Day” than to clean up around the future Derek Owens Park during National Police Week!!

Councilman Ken Johnson and his assistant, Garnell Jamison provided a dumpster which was filled to the brim with over 8 tons of garbage from Parkview, Lamontier, Mount Auburn, East 102nd Street, and MLK Jr Boulevard.

Thank you all for making Cleveland a better place and honoring one of our fallen during National Police Week!!