The Cleveland Police Foundation is honored to recognize Patrol Officers Antonio Andino, Carmen Hall, and Crystal Lewis as our April 2020 Police Officers of the Month. 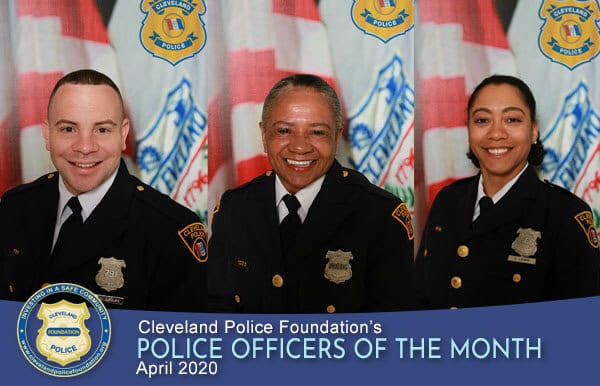 Fourth District Community Engagement Officers P.O. Carmen Hall, P.O. Crystal Lewis, and P.O. Antonio Andino are exceptional. These officers have done some very innovative and creative projects to help create a better relationship between Cleveland police officers and the community served. They are always looking for different avenues to bring together officers and the community and they always have a smile and a great deal of energy wherever they go!

Fourth District Lieutenant Steve Cornacchione says: “The Fourth District CEOs have come up with new and exciting ways to reach the community here in the Fourth District. P.O. Lewis and P.O. Andino started a lunch program that brings together neighborhood officers and students, allowing the kids to interact with the officers. We all know that the younger kids always want to see the officers’ equipment, so they made police vests with real Junior Police badges that the kids can try on. A unicycle club was started at one of the local schools, Eastside Arts Academy. This is run by P.O. Carmen Hall.”

“The CEOs have set up dinners with community groups featuring a question and answer session with officers focusing on bridging the gap so we as a community can better understand each other. They have made inroads with two high schools–JFK and John Adams–to start getting engagement opportunities between officers and students. Lastly, during these times of social distancing they have continued to reach out to citizens by utilizing social media and continuing to forward complaints to officers in the field.”

“Officers Lewis and Andino have been helping maintain morale by setting up meals for their Fourth District family as well as making sure supplies are getting to them in a timely manner. These are just some of the things that the Fourth District CEOs do on a daily basis.”

It is because of this dedication to bringing the community and police officers together that the Cleveland Police Foundation is proud to name Patrol Officers Antonio Andino, Carmen Hall, and Crystal Lewis as its Police Officers of the Month for April 2020.