The 8th Annual City of Cleveland Handgun Buyback held on September 6, 2014 surpassed its goal of removing 250 unwanted handguns and from the community. The event resulted in a total 270 firearms being turned in, which included 253 handguns, 7 shotguns, and 10 rifles, 5 of which were assault weapons. Over the last eight years over 2,750 unwanted firearms have been removed via the annual gun buyback. 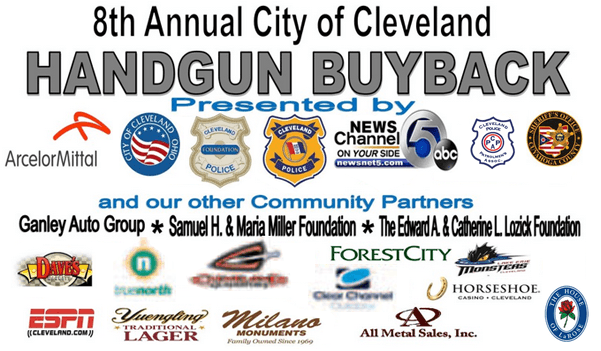 By providing citizens an opportunity to turn in unwanted firearms in a safe and secure environment, it avoids them falling into the wrong hands such as children, or those who might use them to commit violent crimes.

The buyback event is but one method used to reduce violent crime and injury from firearms. Others include educating the public to be responsible gun owners by practicing proper safety and security measures, and arresting criminals who use firearms to perpetrate violent crimes through proactive law enforcement initiatives.

One citizen turning in a handgun in exchange for a $100.00 gift card from TruNorth Shell, one of the event partners, stated “I never wanted a gun in my house. When my husband died, I didn’t know what to do with it. Now it’s going to good use by getting me some gas for my car.”

Mayor Frank Jackson stated “Even with the cool, rainy weather, our residents still cam out in good numbers to get rid of guns that they don’t want around their homes.” CPD Chief Calvin Williams added, “There are 270 more firearms that are out of our neighborhoods and can’t be used to injure our residents and officers.”

“Gun Melt Day” was held on Wednesday, October 29, 2014 at ArcelorMittal Steel, Blast Furnace No. 1. Prior to the gun melt, police officers from the CPD Property and Inspection units processed the firearms and prepared them for disposal. After a brief press conference it was on to the melting pot where officers threw all 270 firearms into the 3,000-degree contents of the pot, never to be used again … except to make a refrigerator, vehicle or other consumer product.

ArcelorMittal VP and General manager Eric Hauge welcomed the opportunity for their employees to play a role in the program that’s helps remove unwanted firearms from the City’s neighborhoods. Adding, “Steel is the most recycled product in the world. It’s good to know that these weapons will be put to good rather than violent use.”

Cleveland Mayor Jackson thanked ArcelorMittal, their employees and all of the community partners who made donations to the Cleveland Police Foundation making it possible to host the program.

“Although it can’t be measured how many lives were saved or injuries prevented by destroying these firearms, however I can assure you that one or more families in this City were saved from the tragedy of a loved one being killed or seriously injured.” said Safety Director Mike McGrath.

Sincere thanks to our community partners who demonstrated their commitment to making our neighborhoods safer through their support of this event: ArcelorMittal and US Steelworkers Local 979, Cleveland Gladiators, Cleveland Police Patrolmen’s Association, Cuyahoga County Sheriff’s Department, D. G. Yuengling & Sons Brewing Company, Dave’s Markets, Lake Erie Monsters, The House of LaRose, TruNorth Shell, WEWS News Channel 5  and the many other community partners through their support of the Cleveland Police Foundation.

To become a community partner of the Handgun Buyback or other program supported by the CPF, please contact Executive Director Charles W. Lane, Jr.: clane@clevelandpolicefoundation.org.