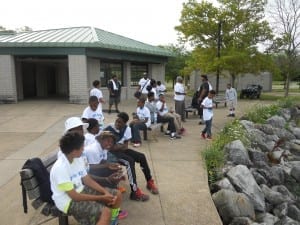 Wildwood Park was the place to be on Thursday as kids from Collinwood, and Glenville Recreation joined Commander Dennis Hill, and his Officers for the 4th Annual Fifth District Cops/Kids Fishing Outing. Upon arriving the kids, officers, and chaperones were given t-shirts to mark the event and began boarding the two charter boats, named the Linda Mae, and Express. After a brief safety session, and information on how to handle the pole, and bait the hook the two groups were on their way to search the waters of Lake Erie for Perch, and anything else that would take their bait. After a few hours of catching a mixed bag of fish, and dealing with a few queasy stomachs, the two groups returned to shore to exchange fish stories, and enjoy a nice lunch served by Community Policing Officers, Captain Keith Sulzer, and Officer Anna Mercada. After lunch the kids got to visit with Officers from the Mounted Unit, Motorcycle Unit, and K-9, and after hearing some of the interaction, and questions asked of the Officers, the Cleveland Division of Police may have found some future recruits. Finally after having some pictures taken, and expressing their thanks for having the opportunity to take part in the event, the kids began leaving the park vowing to return next year, and before leaving I caught up with Jeremiah Davis who stated ” I would like to thank all the Officers that came out and helped us catch fish, and I hope I can come back next year”. I then spoke with Lt. Rick Smrekar of the 5th District and he stated ” I had as much fun as these kids did and I can guarantee that I will be back next year”. On behalf of The Cleveland Police Foundation we would like to thank Captain Vytus Kijauskas, and his crew, the chaperones that assisted on the boats, the kids that participated, and finally a big thank you to all the Officers that took time out of their busy day to make this event a success. Also thanks to the following sponsors,  Ganley Auto Group, Samuel and Maria Miller Foundation, Edward and Catherine Lozick Foundation,  Cops for Kids, The City of Cleveland, Arcillor Mittal, All Metal Sales, C.P.P.A., First Interstate Properties, Saint Lukes Foundation, Passion 4 Fishing, Sport Fish Restoration, and The Ohio Division of Wildlife. 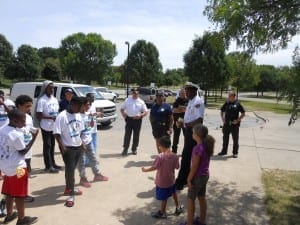